Last weekend I had the chance to visit Cordoba with my program CEA.  Over the past month that I’ve been here I’ve only traveled throughout Spain and I always seem to find myself comparing the city I’m visiting to Seville.  Nothing can give Seville a run for its money, but then I visited Cordoba.  Seville still has my heart, but the essence of Cordoba definitely caught my eye.  When we arrived in Cordoba it was rainy, and dreary which could have made for a useless trip.  But what I discovered was that the vibe throughout the streets was anything but sad.  The history throughout the winding streets made for a lively city. What I like most about Seville and Cordoba is that sense of history throughout the streets of their city centers.  When comparing the two I realized this is what was missing in all the other places I had visited.  The first tour we went on was a walk through the old city center.  During the tour our guide told us a few things that Cordoba was known for.  In particular, Cordoba is known for the pots that hang on the outside perimeter of the buildings.  Lots of the walls were painted white and then decorated with colorful pots and flowers.

Although most of our time spent in Cordoba included many clouds over our heads.  It made the moment when the sun came out right before we left that much sweeter.  The city had a whole new light to it.  The streets were lively with people singing and dancing to celebrate carnival.  And the river was glistening in the sun, which made for a perfect photo-op. 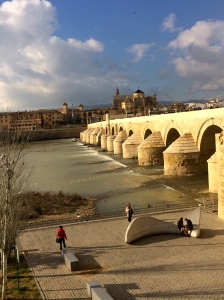